In comparison to the other three power options, (solars|tesla|singulo), the Supermatter Engine is by far the most complex power method. It is recommended that the engine be checked regularly to upkeep and maintain its top performance. However this engine will provide a surplus of power if done right and offers plenty of tweaking to be done for even the most experienced crewmember. 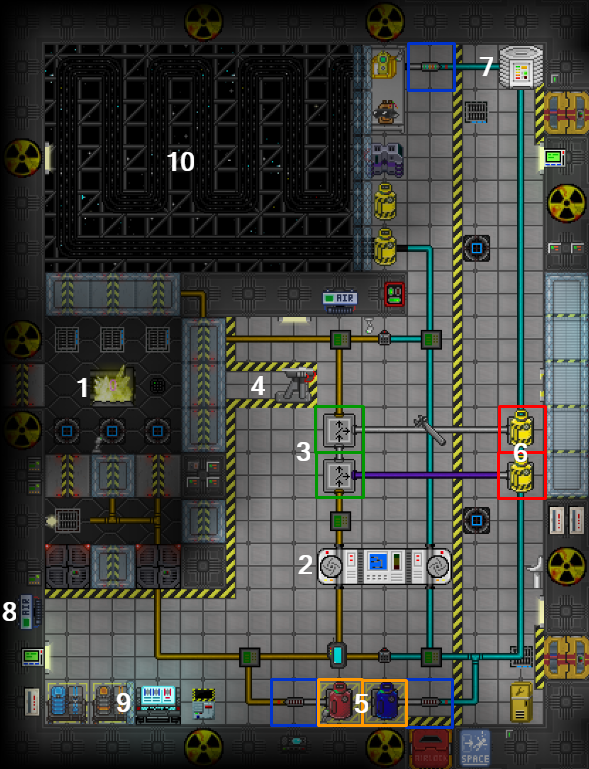 It's not as complex as it looks.

Aboard the ship, the Supermatter Crystal will be the primary power source. In addition a Supermatter shard can be bought from a station using Cargo when docked to a station, the only difference - The shard can be moved around without ending in a horrible death. Both Crystals produce radiation when inert and will cause hallucinations if stared at. When the engine is inert, the shard will produce oxygen and plasma and heat the atmosphere around it. Without any filter the shard will either explode or turn into a Tesla that will destroy the entire ship and kill all crew subject to it. In addition to the thermoelectric loop, the shard will fuel radiation collectors.

The Supermatter is an EXTREMELY unstable crystal with particular properties. Here's how it behaves:

The crystal's power determines how much energy is produced each tick, and also the range and amount of radiation and hallucinations generated. (a 'tick' usually takes around 1-5 seconds depending on server delay)

The crystal must be kept stable if you don't want it to explode.

BZ is an extremely cold gas that instantly freezes anything it touches into solid ice. This is perfect for stabilizing an unstable supermatter crystal.

N2 is a good safety gas. It actively lowers the temperature and the amount of waste gases that the supermatter crystal produces.

N2O reinforces the heat resistance of the supermatter crystal, allowing for much hotter setups than usual.

H2 Is the only stable gas that has zero effect in reaction to the engine chamber, Its usually a good gas to inject into the cooling line or heating line as it holds heat well without the danger of side-effects.

Oxygen is the gas with the best power/danger ratio. It provides a boost to power transmission without actively increasing the waste gas amount or temperature. It does however count against the safety bonus provided by N2.

Plasma is very similar to Oxygen but provides a much higher power boost and waste and heat penalty. The extreme pressures and volumes of gas produced by this gas are very likely to clog pipes. WARNING: The roundstart setup can not handle pure plasma setups.

CO2 is a very dangerous gas. In low concentrations, it doesn't do much but after a certain threshold is passed, it will slowly stabilize the internal crystal charge reactions and reduce the amount of power that the crystal loses every second. In high enough concentrations this can raise the internal power to infinitely high levels. Be careful however, since increased power not only increases the amount of heat and waste, but also causes catastrophic sideeffects long before the crystal delaminates.

The crystal produces plasma and oxygen while it's active.

The crystal will affect nearby mobs while it's active.

Anything that touches the crystal will be consumed and turned into dust. No exceptions. The only way to "safely" transport a shard is to pull it, being careful to not be pushed back into it by someone else.

A TEG based supermatter engine produces power from heat. TEG Stands for Thermo-Electric Generator. One side will be the "Hot loop" and the other side will be the "Cold loop". Some of these setup have a designated burn chamber where plasma and oxygen can safely burn away from the supermatter. Others will require more creativity though you can just use the heat generated from the Supermatter itself to heat the hot loop.

The Aetherwhisp is the most common map in rotation due to it being the one that is most maintained and loved. This guide will focus on that engine which wont be much of an issue as other maps have that exact engine copy and pasted.

Keep in mind while it may be tempting to add a heater to the hot loop to produce infinite, minimal effort power, admins and moderators are given FULL ABILITY to disrupt your engine. Even if it ends the round. You have been warned.

Gases to look out for

To be honest, all of them are useful in their own right except hydrogen you casual!, you'll mainly be dealing with Plasma

as these are to key to fire.

Nitrogen will kill your engine output if you have enough of it in the core. This is both a good thing and a bad thing as N2 can help stop an engine from delaminating. As such, don't put this in unless you want less power.

Nitrous-Oxide is a very useful gas and in some cases better than Nitrogen for stopping a delamination. It increases the temperature tolerance of the crystal. Any core burn engine needs N2O


I use N2O in all of my engines simply because I don't trust you yahoos to be able to keep my engine cool. Also, it's just very helpful. -Altangy

Co2 will be created from the flames of your engine. This is both good and bad. Good engineers know that Co2 can improve an engine's output. Bad engineers let it build up and power delaminate. It's a balance.


I find that 50% Co2 is where the engine starts to power delamniate. -Altangy

It's fine in the cold loop. Bad in the hot loop. We want gas reactions and hydrogen does not have one which limits total power output. Any engine that claims to run on pure hydrogen isn't using the supermatter it's using a room temperature gas.

Much like the age old debate of space the clown or space the Bridge Officer assistant, to scrub or siphon your core is a question we engineers ask ourselves daily.

What or what? I don't know atmospherics and I'm trying to use an atmospherics based engine!
Siphon pulls every gas.
Scrub pulls selected gases.
Both are settings on your scrubbers. If you don't know what a scrubber is, god help you.

For some it's a question of personal preference. Others have no idea what they are doing. And others use drought setting because they are lazy. If you need a gas in the core then use scrub and filter your gasses as needed. If you don't need a gas in the core then feel free to siphon. In either case you need to make sure your pipe network can handle the load. Scrubbing and siphoning both work at the same speed.

You skipped everything above just to get the answers here right? If not, there is hope for you. If so, when your engine delaminates everyone is going to blame you.
As of right now I'm too lazy to write this. Will come back later. You should have the information to set up a TEG engine. -Altangy.

Are you from another department and feel like you don't need to know all this stuff? Just want to get back to growing plants and killing monkeys? Look no further.
This guide references the numbered image of the engine room above.

Setting up the pipes 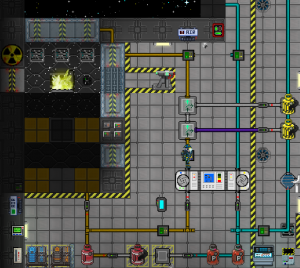 All your shiny new pumps should be turned on. If you have not turned them on, do so now.

Set up the gas loop

Troubleshooting AKA Oh god it's on fire what do I do!? 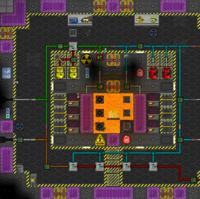 The supermatter's in trouble! You should be able to locate where the issue is from the screenshot alone. Here's the answer.

Turn off the emitter(s)! You don't want any more energy in your supermatter until you've solved the problem.
Inspect the gas loop to confirm it is intact and operational.
Check the

meters to quickly ascertain where a problem may lie.
If any of the meters report an unusually high or low amount of gas, then you're close to finding the issue!

If the space loop is broken:

If the gas temperature is too high to stabilize with the cooling loop alone. Unleash the Supercooled N2

If the supermatter is delaminating and the gas loop is operational, use an

analyzer to check for problem gases in the loop. Someone may have slipped in some carbon dioxide. Double-check the filters to see if they're getting rid of unwanted gases.

If all else failed, pray that an Atmosian elder investigates and finds the problem before it's too late.

Want to sabotage the crystal but can't figure out how to pull it off? Here are some pointers and hints:

Please note that since FTL13 is a cooperative server, breaking the engine and thus ruining the power supply is greifing.

These are the easiest to pull off and require no special conditions. You'll want to keep the supermatter chamber very hot and full of plasma or CO2.

This kind of delamination requires careful gas management but is faster, far more destructive and there's a good chance it will irridiate, burn and shock the engineers who are trying to fix it.

This is by far the most difficult but also the simplest one.