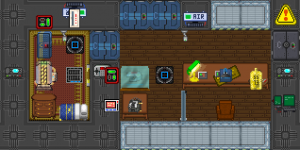 Your personal office and quarters

You shouldn't go Captain unless you are good at communicating, know the map, and know the roles aboard the ship.

You are the Captain, the top of the Chain of Command. It is your duty to ensure the stability and productivity of the ship, as well as carrying out directives or missions from Centcom.

You should have experience of all Heads of Staff jobs. At round start, take the Nuclear Disk with you, call the Heads to report in and keep checking in from time to time on what needs to be done and who should do it.

Bare minimum requirements: Secure dat fukken disk, secure the pinpointer, secure the spare Captain's ID. Only use your authority when it is really required, the Heads of Staff are there for a reason.

Being a Captain – Basics 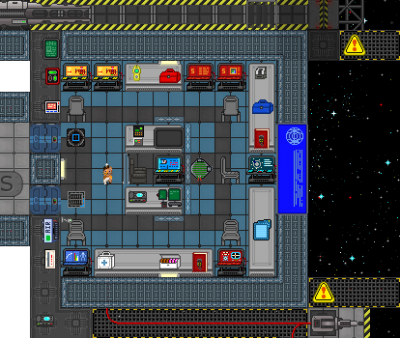 The Captain has spacious quarters, complete with arcade machine, ID computer and Communications console, a Jetpack, a hand teleporter, the Nuclear Authentication Disk, an SSU with a spaceworthy suit of armor and helmet, an energy gun, and a pressurized and humidity controlled display case with your pride and joy, an antique laser gun.

It's probably best to leave the gun where it is, as the case has been outfitted with a handy anti-theft system. You'll probably also be mocked if you carry it around with you.

There is also a locked wooden box in your office filled with medals. These can be awarded to your crew to commend them for exemplary service.

At the start of your mission, take your spare ID and nuclear authentication disk and put them in your backpack. If you've done that, you've done half your job already. If you're feeling particularly vulnerable, give your pinpointer to the Head of Security. After this, walk around the ship and command people. Once you've checked in with the Heads of Staff and the FTL and Shields are setup, head for the Bridge to begin the real job of commanding your officers.

When you’re not fighting Revolutionaries, Traitors, Syndicates and Wizards, you are monitoring the crew and directing the bridge staff. You are on the top of the food chain, and possess the ultimate authority over everyone and everything on your ship.

You are the Judge, the final word, the Big Guy. You have the ultimate veto power over all matters and is the only person who can authorize an execution without a trial. Anyone who questions your authority can technically be tried for mutiny (but trying someone who says "this captain sucks" is pretty silly). There really is no way to tell you exactly how to run things as many people have different leadership styles. However, as Captain, here are some guidelines you should keep in mind:

Thought you were just going to run around and do whatever you want the entire shift? Nah. You're actually needed at the Bridge to command your crew to complete your mission issued to you by Centcom as clean as possible. Of course you will come across bumps along the road and no mission will be perfect, but sometimes you just have to give a little to take a little. Missions range from eliminating a set number of enemy ships or retrieving a high value item and returning back to the Capital with it. Make sure you announce to your crew the objective so that they may support you and back you up, and so that important people know what to expect.
COMMUNICATION IS VERY IMPORTANT: Your officers are looking up to you for input and direction, and sitting in your chair staring blankly ahead without saying a word until prompted is bad captaincy, worrying, and just boring all together. Interact with your crew! Ask for all heads of staff to check in! Chime into department radios to see how things are going! Seize the reins! Be the captain this ship needs!

Uploading Laws to the AI isn’t something you should be doing lightly… unless you’re a traitor. Then go crazy.

Do not get angry with the AI if it does not want you uploading a new law, as Nanotrasen has pre-programed them to be sensitive to law changes. Besides, Nanotrasen wouldn't want another SHODAN fiasco happening again.

But remember the Hierarchy. Law 1 overrides Laws 2, 3, 4, etc. A Law 4 telling the AI to kill all Revolutionaries isn’t going to work. A Law 4 classifying Revolutionaries as Nonhuman and that they must be eliminated works much better. Law priority is enforced by the order they are listed. A law is invalid if it disagrees with previous laws in the form of conflicting orders, or challenges the procession of law priority.

Keep in mind that if the AI announces you are in their upload, uploading laws, people will likely form a lynch mob, regardless of whatever laws you upload, if you even upload any.

Those Assholes From Corporate

With your fancy title, medals, and luxurious excesses it's easy to forget that there is an outside, higher power scrutinizing your every move.

Contact with Central Command may be few and far between, but you're expected to follow any directives issued by them. Centcom will usually issue directives and updates on activities in your sector through the Communications Console located on the Bridge and your office.

If you're unlucky, you might have to deal with a visit from a Centcom Official or Commander. Official visits vary from standard performance reviews, internal investigations, or some other kind of corporate meddling. Whatever the case may be, it is important that you try and keep the Official happy throughout their visit. If all else fails, just make sure you can't be blamed for anything that goes wrong.

However, keep in mind that you still hold authority over any Officials on your ship. That is, as long as you're still the legitimate Captain. If you piss off the wrong guy you might find yourself relieved of command. If the official is causing trouble, though, you are well within your right to have them arrested, and then contact THEIR superior with a complaint.

Contacting Centcom on your own is possible through the use of Communications Consoles, but unless the transmission is urgent it will likely get caught up for weeks in Centcom's notorious bureaucracy. Even then, it'll be a crapshoot.

You are ultimately responsible for the ship and its mission. It is not uncommon for Captains to be court-martialled or even executed if he or she should decide to abandon their ship, regardless of condition. As they hold the ultimate responsibility for the ship and its crew, losing them could likely be perceived by your superiors as desertion, mutiny, gross negligence, and/or sedition.

So keep this in mind when you are facing disaster. Permit no evacuations without your explicit authorization. You should be doing your utmost in keeping the ship up and running --lest you go down with the ship, either one way or the other.

I Am the State

NOTE: By default the Captain cannot be an antagonist.

Traitor Captain is less about completing your objectives and more about turning the entire ship into your own private playroom. With your access and authority you can pretty much take anything you want, and dispatching a lowly subordinate shouldn't take much effort at all. Chances are you won't even need to open your syndicate uplink.

You have more freedom than any traitor could dream of. Liberally hand out execution orders, release and pardon criminals, give the clown all-access, release the singularity, reprogram the AI to fuel your ego, or just generally act like a comdom and demote anyone who gets in your way. Just make sure that you're at least trying to be subtle.

The only person with more potential to fuck things up than you is the AI, and they’re probably not going to do that. So watch your step, your back, and your crew, or you may just end up floating through space wondering why your Oxygen tank is filled with plasma.

As a special note, the gods tend to notice the actions of the captain quite a bit more often than they do anyone else.