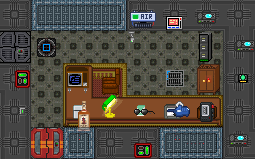 The Detective's job is to investigate the remains of any crime, identify the perpetrator, and then ask Security to arrest them for you. That's right, you have limited security access because you're supposed to be an evidence collector and hunter of monsters, not a god damn beat cop or warden.

You are not Security. You are an investigator. Your revolver is only for self-defense.

Bare minimum requirements: Scan evidence uncovered at crime scenes, look up the fingerprints and DNA strings, and pass the names on to the rest of Security.

As a detective, your primary duty is to investigate crime scenes and use the tools provided to you to identify the perpetrators. You can do this with your Forensic Scanner, your PDA, and some basic intuition.

Your Forensic Scanner is located in your backpack, and the closet in your office has a spare. Go to the crime scene, take a picture of relevant things with your camera and then scan all the surfaces around the scene, such as doors, walls, consoles, and of course, out-of-place items. After evidence has been scanned, place it in an evidence bag for storage and later reference. Be sure to scan any bodies for prints and fibers as well, provided that they haven't been hauled off to genetics or the morgue already.

If the latter case is true, head on over to the morgue and scan the body. Hopefully the person who brought them in wore the Medbay standard-issue Nitrile gloves, or you might find yourself with a rather annoying case of mistaken identity. If this was not the case, be sure to identify who hauled the body in - And ideally, anyone who touched it during the process.

Remember to ALWAYS, ALWAYS, ALWAYS wear your gloves, or you will record your own prints after touching a surface, body, or item. This will at best slow you down, and at worst, end up with you serving time for the very crime you were trying to solve!'

Once you've finished surveying the crime scene, return to either your office or the nearest easy-access Security outpost (if you can get past the outer department doors, you have access to any departmental security office). The former has both a Security Records and Medical Records computer; these allow you to check the fingerprints in the Security database to discern the owners, and the same is true of blood on the Medical Records computer. If you've found a weapon with someone's prints on it (And that person was not the confiscating officer), you've probably got your perp dead to rights. Similarly, if there is blood but no body, you can easily identify the deceased.

Finding fibers can either improve or throw off your lead. For example, if the deceased Captain has fibers from insulated gloves and an Engineer's jumpsuit all over him, it's no great leap of logic to say that an Engineer was the one who did the deed. Conversely, finding nothing but fibers from your own suit, or worse, black gloves, could throw you off and just leave you with a cold case.

If you get a single hit, you've got your guy. Make sure to set him to arrest and bring him in for questioning. It's always a good idea to speak over Security radio and inform them that you've identified the criminal, and that you'd like them arrested - The rank-and-file officers will more often than not be happy to oblige, considering in their eyes, it's open season on anyone with the red-and-white 'w' above their heads. Provide them with any information that could assist in the arrest: Possible contraband on their person, alternate identities, and basic identifying factors like jumpsuit color and hair style.

If the criminal is caught, they may have a trial depending on the severity of the crime and the willingness of the command staff to host one. As the prosecution, you must attend this trial. Bring all the evidence against the criminal including finger print scan results, pictures of the crime scene, and testimonies from possible witnesses.

Of course it's important to keep your evidence at least somewhat organized, but if you're feeling particularly hard boiled and want to go the extra mile (and you manage to convince the right people to actually try a criminal before punishing them), here are some tips:

If you have multiple suspects and matches, you're going to have to do some more investigating and possibly some interviews.

Crimes committed by groups of people provide some distinct advantages and disadvantages for both you and security forces in general. Group crimes are often easily noticeable to any bystander, and the interrogation and subsequent confession of one suspect can lead to a sting on the entire group. On the other hand, these pairs or triads or even larger groups can be difficult to take down without a lot of manpower and commitment on the part of security forces. Changelings and sometimes traitors operate in groups, so you'll have to exercise extra caution when investigating crime scenes you think they're responsible for.

When you do have multiple suspects, it's usually because of inconclusive forensics results. Because you're going to have to figure out the crime using more traditional methods along the lines of interviews, you should make sure to bring your universal recorder with you. Note that a universal recorder also acts as a universal translator, so you should be able to collect the testimonials of sentient slimes, monkeys, and, in the most bizarre of scenarios, xenos.

When conducting interviews, make sure that you set out with a hunch. Only interview people and only ask questions that you think are relevant to the situation. However, in some cases asking a non-pointed question can throw a bluffer off and cause them to slip in their story. People who seem more friendly after moving on from a subject may be lying.

Your PDA comes with an built-in medical scanner that can be toggled on or off, and it works just like a standard medical analyzer. It tells you types of damage a person has on them, any advanced diseases, and most importantly in your line of work their time of death. Use this last fact to narrow down possible suspects.

Don't forget: You have access to the Interrogation room in the brig. Great for when you want to be more thematic, or just need some privacy.

Technically, the above represents the entirety of the detective's job. Despite this, you will rarely be called upon to investigate a crime, you will have to investigate crime scenes on your own initiative. Luckily, there are some other things that the Detective can do instead:

The detective has a lot of shit in his office, which might bewilder you. Luckily, the only absolutely necessary stuff that you don't spawn with are revolver and speed loaders for it.

Here is a list of stuff that the either Detective spawns with, or is in his office:

If you're looking for more equipment, the Warden can issue you some more standard security equipment.

A good balance between cool and useful is a Stun Revolver. Go bother R&D for one.

Can no longer be an antagonist, once more.

Once you start paying attention, the scum the permeates this station becomes evident. The hallways and departments are black with the filth of corruption and apathy. When the Syndicate offered me that job, I took it without hesitation. Someone had to clean up this mess...

You've got carte blanche authority to play it fast and loose. Who do you answer to? Absolutely no one. Your gun, security access and position as the lead investigator makes you basically untouchable if you're smart. Falsify evidence, stage crime scenes and cover up your murders. Creative detectives know how to game the system to their advantage. Or you could just grab a handgun that can actually kill people with its bullets. Your call, ace.