You start in Medbay and literally get to play God. This is a very technical class, but there are a few simple things people can do that are still learning the ins and out of genetics. The main thing you're meant for: find super powers, fix disabilities, and cloning dead people.

Bare minimum requirements: Clone the corpses dropped off at your doorstep. 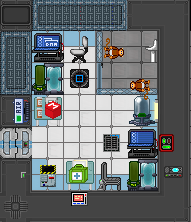 The genetics lab is located in Medbay. It is separated into two sections: Genetic Cloning and Genetic Research 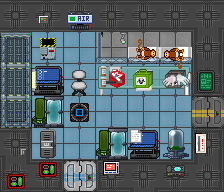 The genetics lab is located in Medbay.

This is one half of your job. Make sure you know how do it (and actually fucking do it).

If you're feeling fancy and have a fuckton of bodies which need cloning, you can force an early ejection of the cloning pod by unlocking the pod with your ID and using the Eject Pod command from the right-click menu. The clone must be at least 40% done before the pod will allow you to eject it this way. The cloning pod will also eject its current unfinished clone if the room's equipment loses power. If you get a cooperative Engineer to unlock the APC for you, you can switch the power off and on to eject the clone.

You need to finish the cloning process over in Cryogenics, so make sure the Cryochambers are loaded with Cryoxadone. Have some Mannitol at hand to cure their massive brain damage, too. This is known as 'Hypercloning', and it speeds up the process of cloning significantly, frees up the cloning machine for another patient, gives cryogenics and bored medical doctors something to do, and it's not inconvenient because they're naked coming out of the pod anyway.

You can take a scan off of someone while they're alive and create a genetic backup ready to be cloned in case they die. This is useful to those of especially high risk of an irretrievable death like the chief engineer or captain.

Any geneticist worth their salt knows that manipulating the DNA of living things is their ball game.

See the Guide to Genetics when you're ready for the real SCIENCE.

Other, more subtle, modifications may be possible. As always, experimentation is encouraged!

WHAT HAS SCIENCE DONE?!

As a traitor, you are pretty much able to do anything you want to dead people in your lab, granted you don't have a coworker or baby sitter. After sticking about for a few moments, any security forces usually vanish from the room of medium priority targets, like the RD or CE. At this time, you can then loot their items and access, or even their appearance! You can easily replace people, just be sure to get rid of the original and wear the right clothes! Perhaps it will help you in the long run.

DO NOT USE MONKEY SE'S ON THE OTHER CREW MEMBERS IF YOU ARE NOT A TRAITOR. THIS WILL GET YOU BANNED.