You are the Munitions Officer. You wanted to fire the MAC cannon, but the Weapons Officer position was already taken. Or maybe you actually wanted to load the MAC cannon. Whatever the reason, you're in charge of the main arm of the NSV Astraeus's anti-ship battery, the Mass Accelerator Cannon cannon.

Bare minimum requirements: Load the MAC cannon without blowing yourself or Munitions up. 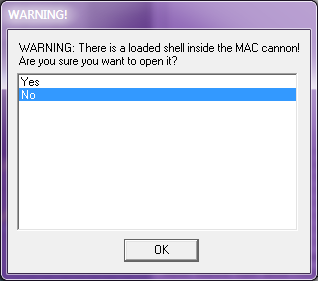 The MAC cannon is your responsibility, so it's probably best to start off with a quick how-to guide to loading it:

Congratulations, the MAC is now loaded. Once there is an armed shell in the MAC, you've passed the point of no return - you cannot unload it without it detonating.

Your Chain of Command

It's a good idea to listen to them when they tell you what type of ammo to load because they're better-equipped to make informed decisions about what ammo would be most effective, but if they ask for you to allow them into the Munitions Bay, for example, you are not required to honor that request. If in doubt, ask the Head of Personnel for advice.

Give me another HE!

There are three different types of ammunition you'll be using, each listed here:

Your WO should either tell you what to load, or come up with a battle plan with you before the shells start flying. If they don't, nag them until they tell you which shell you need - using a shield piercing round against a target with no shields, for example, is a waste of ammunition - and you only get 5 of each to start with!