Congratulations, agent. You have been chosen to join our finest group of operators, the Syndicate Nuclear Operative strike team. Your mission, whether or not you choose to accept it, is to destroy Nanotrasen's most advanced research facility! That's right, you're going to Space Station 13.

But First, You Must Learn How to Crawl 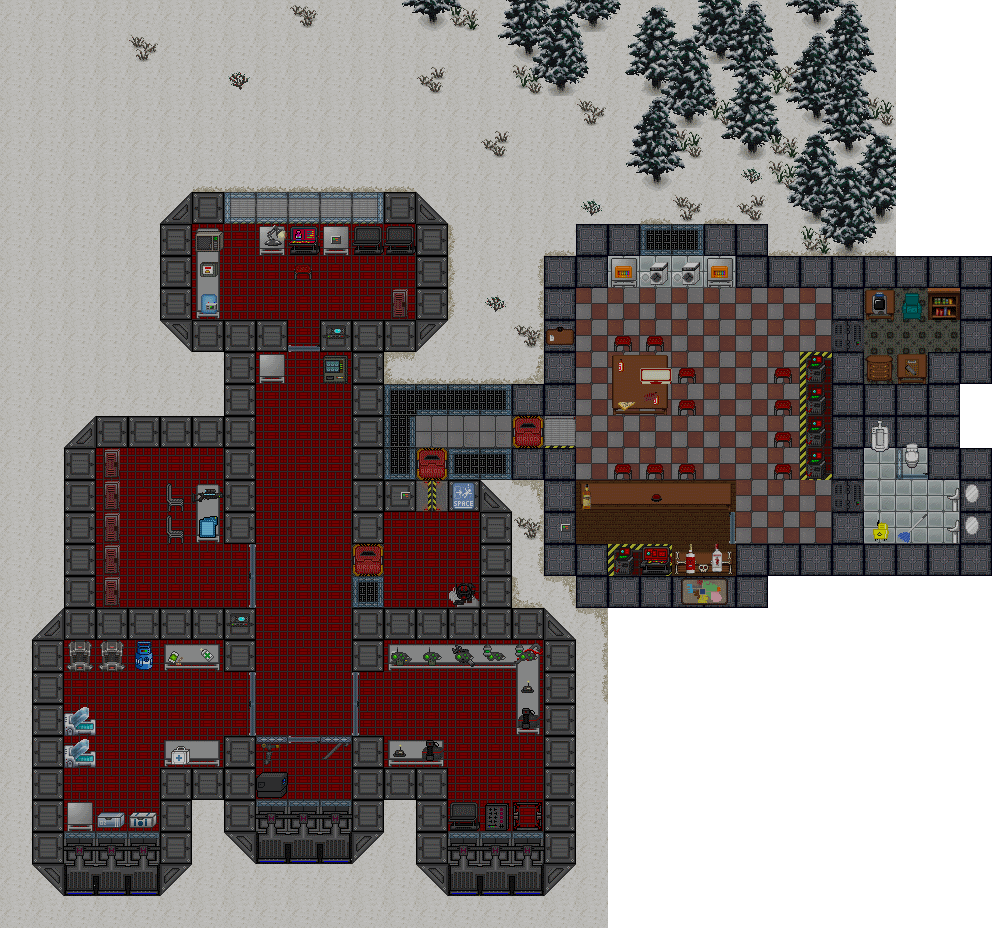 Before you do anything, you must properly prepare yourself. There's no need to rush, instead take the time to discuss strategy with your squad mates - a job well planned is half done!

The checklist is as follows:

There will be a leader. He spawns behind the desk, and is the only one with access to the shutters. If you are the leader but don't feel up to snuff for it, pass your lead agent card to someone else.

You have a special radio frequency, set in an encrypted wavelength. This is how you will, and must communicate with your team. Communicate passwords, safewords, and attack plans on this channel early, there is no telling who might get the headset later.

Making code named strikes with your team can be an effective way to deal with the crew, but it is difficult.

Safewords can be said if you see a comrade but both of you are disguised. "Shamalama dingdong!" or something - fast, and easy to say. The phonetic alphabet can also be useful for this, as in Alpha - A, Bravo - B, Charlie - C and so on.

Passwords are only useful if you have a door guard in the Mothership, or some one with the Military PDA. Make it as you want, said over the Syndicate frequency.

LISTEN TO YOUR LEADER (the guy who spawns inside the tables he is the only one with access to the button to the shutters)! Your team should talk over about their plan of attack, but the leader should have the final say how things are gonna be since he has the power to buy all the good stuff.

Ordering Gear as a Team

Telecrystal Management Consoles: These consoles work to allow your team to manage their telecrystals. The Telecrystal Stations accept any item with a Syndicate Uplink (PDA, headset, radio, etc.). Once the Uplink is inserted, they can donate their telecrystals to the group's boss console. It's best to go ahead and donate all of your crystals and wait for your commander to dish them out, or buy big stompy mechs!

Team Telecrystal Management Console can then take its telecrystal pool and distribute it among the hooked Uplink Stations.

It gets an amount of bonus telecrystals based on the round population, allowing nuke op equipment to scale with the increased threat of a fully-manned station.

Each operative spawns with a personal Syndicate Uplink radio with 30 Telecrystals pre loaded. STOP! Before you waste your crystals on a balloon, take note of the computer terminals in front of you. Once you insert your Uplink into it these new devices allow for your team leader to assign you additional Telecrystals or for you to donate your own Telecrystals to a common pool for your leader to draw upon. Why would you give away your crystals? Giving your crystals to your team leader will allow him to save up and buy some expensive and powerful goodies, like a freaking assault mech!

Once your team has bought the items essential to your plan you can now selfishly buy what you will need for the mission, however you need to pause and think hard. What Syndicate Items will you need? Which will cause a huge backlash if used against your team? Now, think what everyone else will likely need. The problem with the agent ID is the access -- you have very little, but an emag, powersink or stolen high-ranking ID will change that in a moment. You do not have an ID or a position at the station, so don't worry about people finding the emagged doors. Everyone on the team should have one. The chameleon kit is wonderful for sneaking in, especially with some proper documentation. Bombs are great in the right hands. Energy swords, especially if you make double-bladed eswords, are good for blocking enemy fire - but can be easily turned against you if an assistant gets a lucky disarm in. Syndicate borgs are great tanks, and are even more robust if you have a welder, but are at great risk from ion rifle shots. 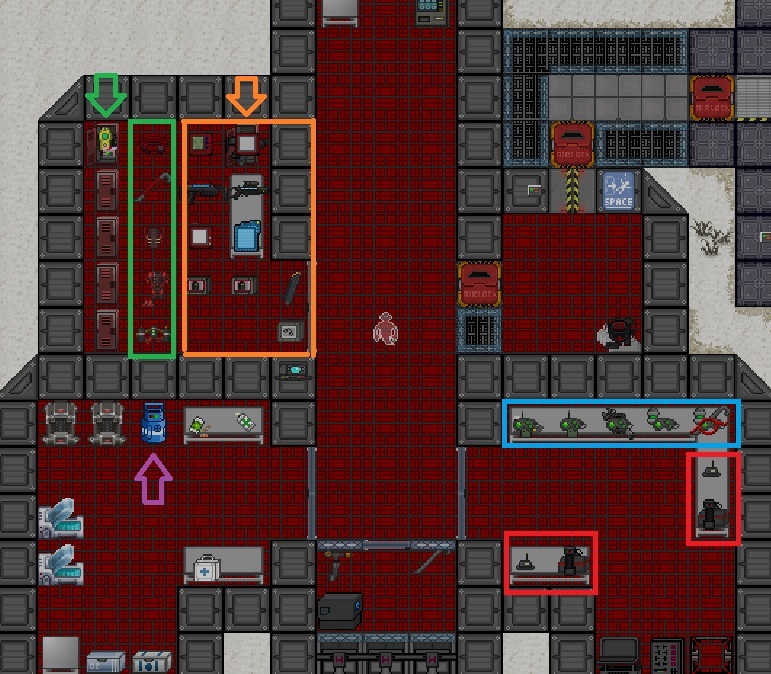 The fuck is this pic supposed to be?
Green & orange: weapons (and tools).
Blue & red: tools and miscellaneous shit.
Purple: If you don't know what this is, we really hope you're not a Nuke Op right now.

You must now equip yourself for space travel so you can invade the station.

Once you are space ready, and your internals are running from your jetpack, look into the Equipment Room and pick up a pair of Nightvision goggles if you have not already bought a pair of thermals, this is double important if you plan on using a Powersink.

You are now completely outfitted, check the inside of your backpack/military belt and throw out what you will not use, this will be handy for the next stage of equipping yourself with weapons.

This is My Rifle

A quick and dirty list of the common weapons employed by Syndicate Operatives in the field.

You've got a pinpointer, right? This device, once turned on, will act as a compass directing you straight to your primary target: The nuclear authentication disk. Every operative that spawns at the start of the round will start with a pinpointer in one of their pockets. Grab it, turn it on by using it in your hand and put it back in your pocket so you can always see it.

The military PDA is very handy if you want to escape after you set the nuke (and I know you do), make sure you assign the PDA to someone who has the least chance of dying and won't fuck off into space. The PDA also comes with a free Detomatrix cartridge, you can use that to thin the heard.

Now, you have your equipment, tools, and toys. But the trouble is just getting started as you strike the heart of the wild.

You are equipped and armed with the best, but what matters is the will to win, and the thirst for blood. Couple that with wisdom, and a large helping of know how, and you have a chance. But what makes the Syndicate agent successful isn't their red suit, or revolver, it is their team.

The Syndicate Mothership is NOT in proximity of the station when the nuke team is first sent out. One of the Nuclear Operatives must use the control computer to move the Mothership into close proximity to the station. Previously, you also had the option of utilizing the mothership's teleporter assembly and a purchased teleporter board to launch your assault. Sadly, that was removed in favor of the...

Grab your team, cram into the pod, select your area and launch. You'll be on station within seconds, obliterating anything unfortunate enough to be caught in the way. From there it's a simple matter of assaulting the crew and cornering whatever poor bastard has the disk. Caveat emptor: The assault pod is a one way trip so make sure you have an exit strategy.

Alternatively, your team leader could choose to declare war. This alerts the station crew that you're planning to kick down their door in about 20 minutes, but it gives the ops a huge TC bonus. Declaring war doesn't change any of the above, except you lose the luxury of having time to come up with a plan.

You need this disk, but as it could be guarded by the Captain, Head of Security, Clown, or the Head of Personnel... you best go in without second thoughts or distractions. Even a lure and false positive to get the disk holder to where you want them will be effective.

One method includes blowing up the wall the disk holder has their back to. A block of C4 will knock down any wall and seriously wound whoever's on the other side.

If you're in the bag for a more elaborate ruse, have one of your team members cause a ruckus in a secure area, forcing the disk carrier to flee right into the arms of your waiting team members.

Don't be afraid to think outside the box! This game mode in particular lends itself to unconventional approaches.

Getting the disk is just the first half of the battle. Now you have to destroy the station. Haul ass back to the mothership and grab the nuke from the aft storage area. Take the nuke back to the station and find an area to set it up.

If any other Nuke Agents are alive, give them a moment to get to the Mothership. Once you and your buddies are loaded in the Mothership, get out of there.

Assault Syndicate cyborgs are purchasable from an uplink by using 80 telecrystals. A random ghost from the spectators with the operative preference enabled will be chosen for this (if none is found, you can refund the teleporter item you get). Syndicate cyborgs are very useful for going loud, as they cannot be stunned the same as Operatives can and have powerful weaponry (plus the means to emag other borgs). Syndicate cyborgs can also tell who other operatives are, regardless of their apparel. In addition, they have an energy cell with a charge of 25000 watts, equivalent to 2 1/2 high-capacity cells. They come with the following modules:

Guys? Where are you?

Syndiborgs have a handy little device called the operative pinpointer. This does not point toward the nuclear disk like the other pinpointers - instead, this points towards the nearest nuclear operative. If a syndiborg is lost or the radio is dead silent, they can use the pinpointer to find their way to an operative. Of course, it does have drawbacks, like not discriminating between a Syndicate corpse and a Syndicate operative, as well as a tendency to stick to the same operative. However, it's very useful for coordinating with your team, and since it has no power draw it should be kept active at all times.