From FTL13
(Redirected from Security)
Jump to navigation Jump to search

Welcome to Security. Chances are that you have been assigned this job because it was the only available position other than Assistant. Since you'd rather not end up a corpse, or doubt the prospects of reassignment, you've chosen the Few, the Red, and the Despised.

Important: DO NOT play Security if you are new to FTL13! You will become a liability and everyone will have a bad time.

Bare minimum requirements: Do not turn into Shitcurity.

The Brig, your homebase

You are the sole guardian between the ideals of justice and the wild psychotics that your company has chosen to advance its interests in space. Just because everyone else is insane, however, does not mean you are permitted to go hog-wild and beat them all unconscious to strap them to beds. Professionals have standards.

How to Do Your Job

Well, this page is designed to turn you from angry, bitter waste of supplies into a useful and productive member of the station community. A few things to immediately note:

Each officer is given an assignment when they join the game. Most will be assigned to guard a department. Department guards are given a small security office pretty much limited to wandering their department hallways and are given limited access to said department, and are able to use that department's radio channel. Department guards are also marked with color-coded armbands. While they are not required to remain at their post, it is their responsibility to protect it.

Like general Security Officers, department guards report directly to the Head of Security. However, they should generally follow the wishes of the head of the department they are guarding. Guards may be dismissed from their post by the department head.

Department Head: Executive Officer (but in practice, you will rather cooperate with Quartermaster) 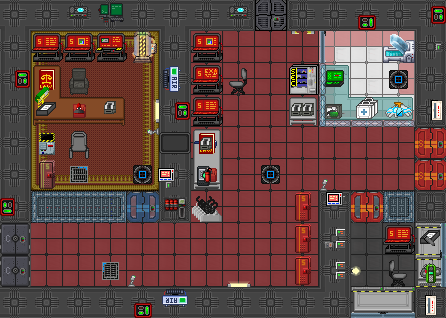 The Security Office west of the Brig

The first step after you arrive is to find an unused security locker in the brig's equipment room. If it has all been claimed, ask the Warden for additional resources.

See here what items you're about to use and how to use them.

See here how to equip yourself so you'll be ready for everything the shift may throw at you.

Always have your tools recharged after an arrest. If your flash is burnt out, get a new one from the lockers or security vending machine and hand your old one to a roboticist. Then take your baton or taser, pop them in the charger station in your security office and wait for the light to change from green to yellow. Having a charged stun baton is sometimes almost always the difference between life and death.

Any good Security Officer always has some of these around at all times. They are delightful little munchables that can be obtained in a few ways. You can find an immediate supply in the donut boxes around the ship, and you can (ironically) use your Hacking skills to extract them from the security vending machines. If there is a severe shortage of donuts, you can always get the Chef to make you more. There are four types of donuts.

Frosted Donut: Like the plain donut, but heals more health.

Jelly Donut: Holy Jesus! What is that? What the fuck is that? WHAT IS THAT, PRIVATE PYLE? Only obtainable through the Chef. Heals more than the Frosted Donut, gives more nutrition.

Chaos Donut: Only obtainable through the Chef. Kills you, due to a great deal of entropy caused by eating it.

You are most essential when chaos has broken out. When Joe Schmoe has decided to take the law into his own hands, it's usually with murderous and arbitrary intent. This cannot be allowed. If you are doing your job, it should never come to pass.

Sometimes syndicate forces will encourage the crew to rebel against the Heads of Staff. This will not be a simple protest. It will be a riot culminating in multiple murders and a mutiny. Needless to say, you will be a target if you move to prevent this -- and you must move to prevent this.

When there has been proof established that a person has been brainwashed, detain them as normal and ask the Heads what you should do. Usually they'll want you to attempt to deprogram them. Request a loyalty implant from the Warden or Head of Security and they should visibly change their attitude when remembering their true allegiance. Barring that, apply your deactivated stun baton repeatedly to their forehead in a forceful manner. If death should occur without change, bring the body to the roboticists.

There may be days when syndicate forces invade the ship directly with the intent to use a nuclear device to destroy it entirely. Anyone who isn't crew is to be violently and sufficiently repelled. Detain them when able, confiscate everything, and eliminate when all other options are exhausted. Communication is most important right now. Ensure that the captain, or whoever bears the disk, is guarded at all times. If things go completely out of control, do what you must to get the shuttle called and the disk onto it. Trust no one if you can't see their face. It is not unreasonable to ask them to remove any masks and stun them to remove it yourself if they refuse.

Wizard: Of Bed-knobs And Broomsticks

When the Wizard Federation has sent a representative, it is not in peace. You are facing no mere mortal. A wizard is a highly trained killing machine of unknown potential. Your stun baton will be useless. Find a gun. You must keep your wits about you and your bravery steadfast! Stun the wizard, beat him unconscious, remove the clothing that gives him power, and don't stop hitting until his brain has exited his skull. The only good wizard is a dead wizard.

When gangs take root on the ship, you're in for a violent day. Most gangsters will be more occupied with growing their ranks, defending their turf and fighting enemy gangsters than with Security; however, it is still your duty to protect the ship, keep the peace, and make sure they don't take over. Keep an eye out for suspicious behavior. Loyalty implants can deconvert gangsters and will identify gang bosses, but they can be removed or overridden. Trust no one. If a gang manages to put down a Dominator, destroy it.

Cultists of Nar-Sie, unless apprehended, can quickly overcome even the most prepared and robust Security crew. The Chaplain will be your best friend. Find him (assuming the cultists haven't gotten to him already), protect him, and work with him to produce holy water, which deconverts cultists after a short period of time. Otherwise, standard procedure about searches and loyalty implants applies. For more tips, read the cult guide.