The Toxins Mixing consists of three facilities, they are (from port to starboard): Toxins Storage, Toxins Lab and Toxins Test Chamber.

This lab focuses on exploring the possibilities of plasma gas, typically in the form of massive explosions. Also attached to the east is the Launch Room, where you can use a mass driver to send bombs to the Toxins Test Chamber.

The mixing room is equipped with an assortment of bomb-making tools including a gas mixing chamber, a piping system and the precious tank transfer valves. 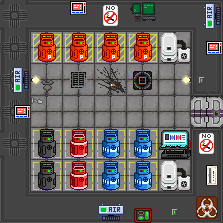 Stores air canisters holding every kind of gas you would ever need. As toxin leaks from this room are very dangerous and difficult to clean out, the room is equipped with two high-powered scrubbers (that need to be turned on otherwise they're useless). If this room gets set on fire, it will never stop burning. Contents: five canisters full of plasma, two canisters of CO2, two canisters of N2O and four canisters of O2.

Detached from the rest of the station towards the east of Toxins Mixing is the large, empty, airless and unheated room used to test bombs. It has several cameras that can be accessed from the Launch Room. It is essentially the goal of every scientist to completely demolish this place, also follows the same principles of the Vacant Office

While the Toxins Test Chamber has air, it has no vents to replace escaping air from opening doors, and it has no heat, so it is not survivable without a space suit. This makes it a favorite location for corpse storage, powersinks, and Alien hives.